This year, I have chosen “Beyond Kitsch” as the theme of the eTextile Summer Camp. But why Kitsch? The starting point of the story is rather simple.

Recently there are strong interest in wearable technology and eTextiles. Many big companies are addressing their interest and running large scale competitions in this field. Few year’s ago, when I talk about eTextiles, I could notice the “???” on my lister’s face. But now a days, you get an acknowledgement and notice this is not an avant-garde practice any longer. On the other hand, if you look at the projects produced, there are certain kinds of projects that I would call (I am afraid..) “Kitsch”, namely “blinky LED T-shirts”. Well, this is probably the matter of taste, and you would have different things you would call as “Kitsch”. We probably agree that there are “Kitsch” category in eTextiles, and who knows my own project maybe a Kitsch for others. Well, no one likes to be called one’s work as “Kitsch”. But what is “Kitsch” precisely? The word “Kitsch” originally started to be used among the painting circles in 1870s. Although the origin of the word is unclear, it is said that it comes from the German word “Kitschen”, which means “to scrape together/ smooth down sludge on the street” or “VerKitschen”, meaning “sell off cheaply”.
I picked 3 literature to further investigate on the concept of Kitsch. The first one is an essay written by an art critique Clement Greenberg in 1939 called “Avant-Garde and Kitsch”. The second is Winfried Menninghaus’s study on Walter Benjamin’s Arcades Project, “On the ‘Vital Significance’ of Kitsch: Walter Benjamin’s Politics of ‘Bad Taste’”. The Arcades Project is written by Benjamin between 1927 and 1940. The last one is an essay by an American writer Susan Sontag, “Notes on ‘Camp’” written in 1964.

Reading material (please read the following material prior to the camp)
Avant-Garde and Kitsch by Clement Greenberg
On the ‘Vital Significance’ of Kitsch: Walter Benjamin’s Politics of ‘Bad Taste’ by Winfried Menninghaus (page 39-57)
Notes On ‘Camp’ by Susan Sontag

Greenberg defines Kitsch as an imitation of genuine culture, while Avant-Garde is an imitation of imitating, another words, imitation of the process of Art. The later dismiss the subject matter and focus on the medium itself to become “abstract”. This is the result of artists losing the common reference or symbolism with their new audience: the urbanized peasants.The industrial revolution drove countryside population to cities to work in factories. These urbanized masses achieved universal literacy as they moved. Reading and writing became standard skills, while they still did not achieve leisure, comfort, nor the enjoyment of traditional culture as the bourgeois had. Moreover they lost the connection with their folk culture. Now these new class with universal literacy need new kind of culture that fits to their own consumption. The Kitsch came in to fulfill this need, according to Greenberg.
It provides “the values of the vividly recognizable, the miraculous and the sympathetic” that are easy to consume without the need of reflection. The examples of this popular, commercial culture are “magazine covers, illustrations, ads, slick and pulp fiction, comics, Tin Pan Alley music, tap dancing, Hollywood movies, etc., etc.” Literacy“no longer served to distinguish an individual’s cultural inclinations, since it was no longer the exclusive concomitant of refined tastes”. This is the dawn of the “Bad taste”, according to Greenberg. Greenberg sees Kitsch as a threat to genuine culture as “It borrows from it [a fully matured cultural tradition] devices, tricks, stratagems, rules of thumb, themes, converts them into a system, and discards the rest. It draws its life blood, so to speak, from this reservoir of accumulated experience”. On the other hand the only living culture, Avant-Garde slowly dies off as its secret host, an elite among the ruling class with whom “attached by an umbilical cord of gold” shrinks away.

Benjamin, a thinker and a writer, sees the value of Kitsch differently. He finds ‘something that is warming’ ‘Romantic’ and ‘sentimental’ in the object of Kitsch. He analyses that it provides the link to the previous generation as “For the sentimentality of our parents, so often distilled, is good for providing the most objective image of our feelings. The long-windedness of their speeches, bitter as gall, … [condenses, in our perception, into an arabesque rebus]; the ornament of conversation was full of the most … [intricate] entanglements. Within is heartfelt sympathy, is love, is kitsch.” What Greenberg considered as cheep imitations for uneducated masses are for Benjamin, sentimental romantic objects.
Benjamin considers Kitsch as utilitarian object distinguished from Art. He sees Art as “ [it] begins at a distance of two meters from the body” and the Kitsch as “the world of things advances on the human being; it yields to his uncertain grasp”. As Art “no longer finds the time’ to keep up with the tempo dictated by technology and fashion”, this proximate to our body utilitarian object fills the gap in between. This object provides us “heart’s ease” with “instantaneous emotional gratification without intellectual effort, without the requirement of distance, without sublimation”.
For Benjamin, Kitsch is “a product of the contemporary distortions in the relationship between art and technology” and is the result of failure to integrate the advanced state of technology into the “expression” of social dream energies.
It is interesting to see for Greenberg and Benjamin who wrote these texts in the early 20th century, Kitsch was the product of advancement in technology. For Greenberg, advancement in technology caused the universal literacy to mass who did not yet learn the “taste” for genuine culture becoming consumer for Kitsch, for Benjamin it caused the gap between art and technology resulting to produce something to fill in, which is Kitsch.

My dear teacher Robert Pfaller gave a great lecture on Kitsch while I was studying in Linz. He explained the aesthetics of Kitsch as “it is too bad that it’s good again”. What we consider Kitsch now is not commercial magazine covers or decorations in Paris Arcades. In fact not all the “bad taste” things are considered Kitsch. It has to fulfill this cycle of “it is too bad that it’s good again”to be included in the aesthetics of Kitsch.

In 1964, Susan Sontag introduces the definition of ‘Camp’ in her essay “Notes On ‘Camp’”.
‘Camp’ is not the same as Kitsch but could share the same spirit as she says “Many examples of Camp are things which, from a “serious” point of view, are either bad art or kitsch. Not all, though”. How does the mechanism of ‘Camp’ work? How does the “bad taste” for Greenberg achieve the respect in ‘Camp’?
First of all, Sontag defines “Camp is a certain mode of aestheticism. It is one way of seeing the world as an aesthetic phenomenon”. She continues that ‘Camp’ is “a quality discoverable in objects and the behavior of persons”. Interestingly it almost sounds like creating a cultural bourgeois with “camp taste” instead of classic “good taste”. Sontag calls this as “ how to be a dandy in the age of mass culture”. This cultural bourgeois or modern dandyism is not defined by their economic situation, class nor literacy, but having an appetite in certain kinds of modes. “ It [Camp] doesn’t argue that the good is bad, or the bad is good. What it does is to offer for art (and life) a different — a supplementary — set of standards.” But how does this standard work?
“Camp is art that proposes itself seriously, but cannot be taken altogether seriously because it is “too much””. It is too glamourous, too theatrical, too extravagant and too exaggerated. What separates “just bad” to ‘Camp’ is the level of this “too much”-ness and whether it ends up in failure or success. Sontag also writes that some things can become ‘Camp’ in time as “the process of aging or deterioration provides the necessary detachment — or arouses a necessary sympathy”. This reminds me of the romantic sympathy Benjamin expressed in his Kitsch objects. The everyday fantasies of previous generation can be a fashion for the next generation. The important point Sontag makes is that “The experiences of ‘Camp’ are based on the great discovery that the sensibility of high culture has no monopoly upon refinement. ‘Camp’ asserts that good taste is not simply good taste; that there exists, indeed, a good taste of bad taste.” Kitsch plays important role in the Greenberg’s pessimism on the loss of genuine culture to Sontag’s optimism on the liberation of cultural monopoly. 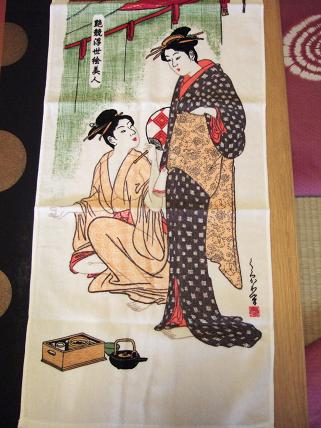 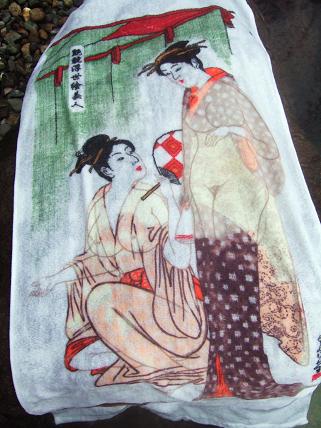 Japanese hot springs souvenir towel with Thermochromic print. As you go into the hot water, the lady gets naked.

Now it is 2014, fifty years from the “Notes On ‘Camp’”, and we go back to the story of blinky LED. Well, this is just an example, but we do realize that eTextiles does display “the values of the vividly recognizable, the miraculous and the sympathetic” to many people perhaps. Who are these “many people” we talk about anyway? Are they the masses of x- peasants in a big city?
The Bourgeois, the masses, the artists, almost everyone started as illiterate when it comes to digital literacy, achieving literacy in the last decades. This quick gain of digital literacy is something similar to the universal literacy of industrial revolution era. We all are x-peasants in this way. If the high culture was based on the exclusive concomitant of refined tastes of literates, digital culture including eTextile has no literates to act as connoisseurs maintaining the taste of high culture. As I read through these 3 texts, I more and more started to like the idea of considering eTextiles (including my own practice) as Kitsch, in fact, it is not even there yet.
So, we start from Kitsch. We could imitate traditional textiles, or revive the folk textiles, we could make something entertaining and fun, we could predict future and propose miraculous prototypes… Can we find ‘Camp’ in our practices? Can we create glamourous extravagant dream of Kitsch, the crystalized fantasy that plays with our politics of good and bad taste? Will it liberate the monopolized value in aesthetics of technology?
The recent interest in wearable technology from industries may spread into eTextiles. It will
provide mass market for eTextiles in future. Some of them will turn into an utilitarian mass production object fulfilling the Kitsch-ness of Greenberg. I wonder if then one will be able to find something romantic and sentimental, something “heart warming” in them as Benjamin did in Arcades project.
Kitsch can be used as a political tool as Nazi did in early 20th century. What are the new politics around the technology and textiles? Could we overcome the gap between new technical possibilities and the traditional aesthetic role expressing the social dream energies of our time?

What will await us beyond Kitsch?

The text in PDF >> Theme_Beyond_Kitsch