This page was used as a preparation for the exhibition.

Title: Yellow Things: Le Processus: (part of Super (-nova) Textile Dataviz)
Outline: On show will be research samples and try-outs for a garment showing/visualizing Supernova counts (exploding stars in our Universe). This specific “yellow things: Le Processus” is part of an artistic research “Dataviz on clothing” and research on incorporating new hardware into garments (very bright Led panels, Led strips). A first sketch of some garments will be shown at the 2014 e-textile summercamp.
The sketchy results of “Le Processus” below can be seen here:
http://myfablab.wordpress.com/2014/07/21/supernova-dataviz-textile-1/
and
http://myfablab.wordpress.com/2014/07/21/supernova-dataviz-textile-2/
Le Processus pictures: 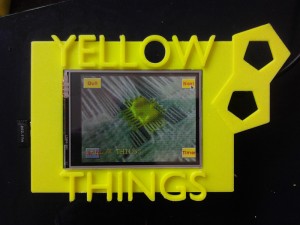 wefts with an Attiny85 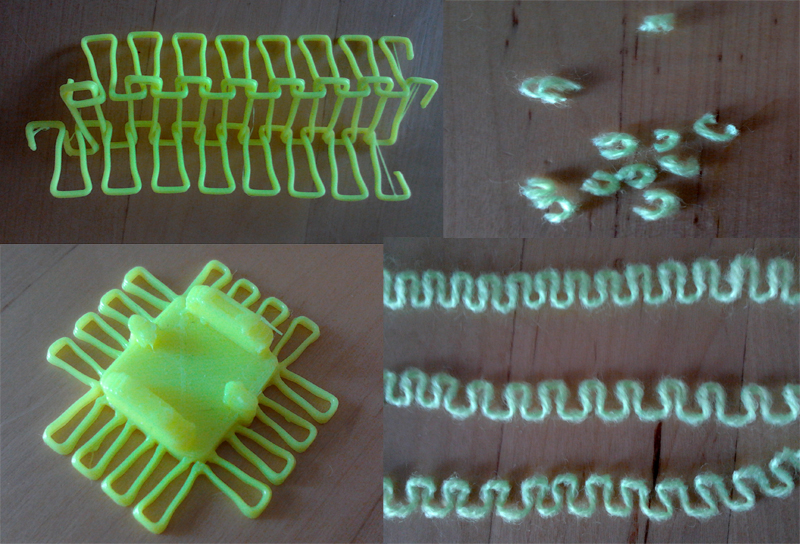 rectangular frames for solar cells….left a bit dull? Right should be a little bit more exiting…

tuck knitting and Attiny of a sewable shape

above  led circle under 3 layers of tuck knitting 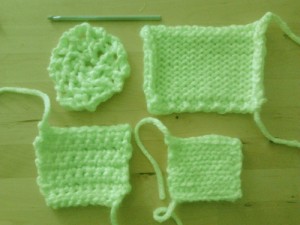 using the baby loom to experiment weaving attiny’s into textiles

pocket with LED light, opening and closing using a servo, a mirror should direct the light, and because a pocket has a direction in the gravitatonal field, this reflection should go upwards – garment – directionwisely.

Left a transparency on a microwave background radiation distribution (rather fitting for supernova’s, although it is at the other side of star formation). Right a combo of knitting and some yellow textile. 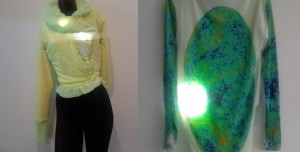 Dataviz is normally done with powerfull computers and sophisticated screens. The dress as interface is the opposite: very reduced in visualizing possibilities and strangely curved. This makes doing dataviz on the surface of a dress a challenge (or a folly). Is it possible to be in competition with computer screen using these different properties of garments as interface?
example: (datavisualisation of current Sun activity) 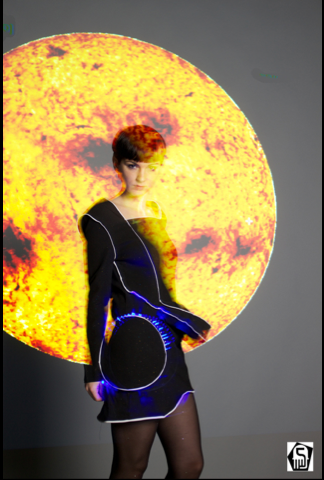 (not on display in Paillard)

http://www.nightofthenerds.com/portfolio-items/experience-de-solar-rim-dress-fashion-en-datavisualisatie/
2. Exoplanet vest, the textile motivated to adopt an exoplanet, that is relate to phenomena far away from the Earth, it shows names of exoplanets on the display depending on input from a wii remote controller:
https://2013.spaceappschallenge.org/project/wearable-solar-vest/

(not on display in Paillard)

New LED panels and ledstrips are becoming available in the last years. How to incorporate these “monster” devices into garments?
Working on the combination of fabric and the big LED panels.
From an interface point of view, these LED panels are very crude. Just a big flash or light. But this property exactly fits the supernova outfit. It would also be impossible to have this effect of exploding on a screen.
The reason to investigate these powerful media for this subject is clear: supernova are the most bright (exploding) stars in the universe. 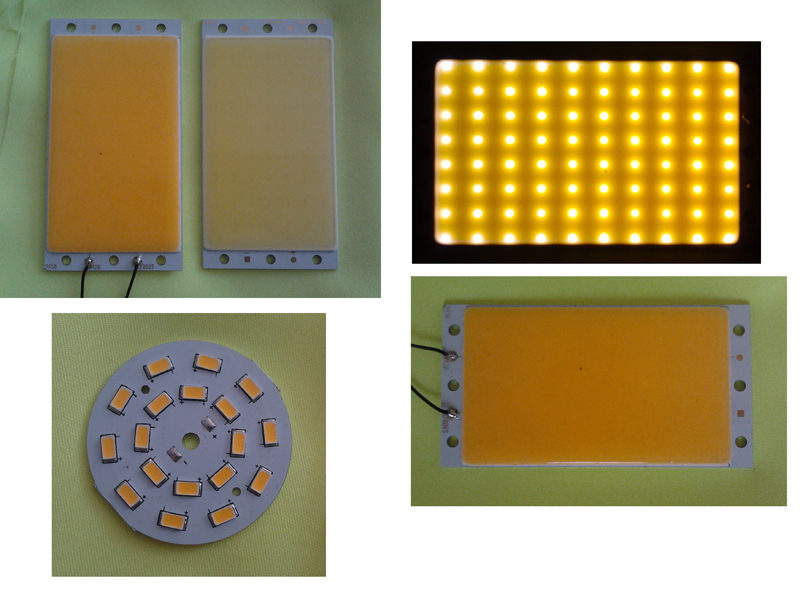 http://www.astronomy.ohio-state.edu/~assassin/followup/asassn14bf.png
Critical remarks:
The astronomical dataviz on clothing is an autonomous practice, being on itself, helping nobody, not promoting any human value. Not even human ingenuity: what is new, sophisticated data today is crude tomorrow. It is not a perfomance.

It is totally ignoring the “Kitsch” theme of the summercamp. It has nothing to do with high-low culture contrasts (if there is any left nowadays), it is not sentimentaly presenting things from popular science, neither is it camp. (This doesn’t mean these themes are not interesting, just that cosmolgy dataviz in garments is at a distance from this conglomerate.)

This type of data design is making the scientific data un-clear (reproducing known facts from the internet, blurring it into a non transparent medium) making it unacceptable for scientists. At the same time the chosen contemporary scientific content is too far away from popular science to be appreciated by non specialists.
But…

Datavis in textiles, garments, clothing demonstrates the richness of ideaspace. Science maybe a holy grail, but it is also a stage and a reduction – simplification. Humans live in a rich mutli dimensional something-everything. Dataviz within fashion is a small track I have chosen in the jungle of possibility space.
“Ziel des Fragens ist somit nicht, eine Antwort zu bekommen, sondern durch das Fragen aufzudecken, was ohne es weiter in Vergessenheit geriete.” Vorträge und Aufsätze, Heidegger.
Of course there are questions:
Already mentioned is the “interface” of clothing
The surface
The layeredness
interactivity
design versus content
Exhibition