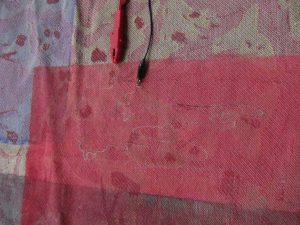 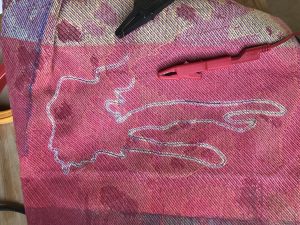 I joined the Loud & Expressive Group because the title fits in perfectly with my practice and research interests. I came to camp right after completing a 3 week residency at MASS MoCA. My idea was to create a series of textiles that would reveal images, or create an animation, when sung to. While in residence at MASS MoCA, I started part one of this research- to over print jacquard woven textiles with Thermochromic pigment- the type I used disappeared when heat was applied. In the Loud & Expressive group I worked on the next part of this research- embroidering with copper thread to create a heating element that would reveal an image when triggered. The switch was triggered by sound. In the final version of this project, I hope to have multiple circuits on each textile, and each circuit will be ‘tuned’ to a specific note or tone. The textile will be a musician, and a score. It is an active participant in the creation of the music. It is also guiding the creation of the music- one might sing to it in certain patterns to reveal the images in a certain pattern.