Where it’s worn translucent in places 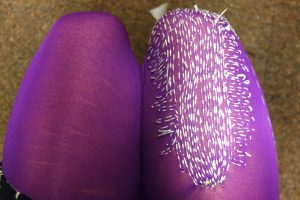 Exploring sound, movement and worn garments. Embarrassing the mess and wear of life. 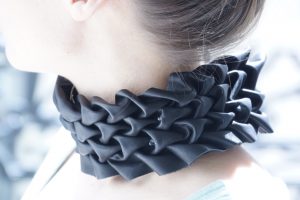 The Movie is an ironic criminal story about a murder in the art scene. Main actors in the movie are artworks made for the film. The E-textiles jewelry blinks according to incoming calls or messages of the wearing person in the movie, who is an art collector and likes extravagant accessoiries. 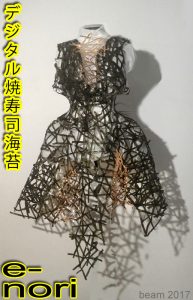 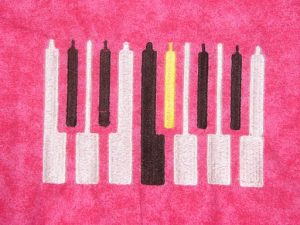 This enchanted object was made when I didnt know yet how to make it work. It was intended to inspire and provoke my telaented colleagues who have now invented the solutions to realize the dream 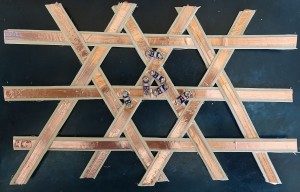 Rectangular grids are dominant forms in electronics and textiles. Triaxial grids have not been explored in e-textile work so this breadboard is offered to begin these explorations. Triaxial grids sample the plane with higher density and the availability of whug connections as well as warp and woof simplifies circuits by providing a natural power/ground/signal triple. 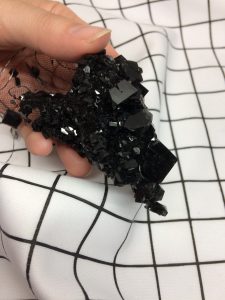 Amorphous Allotropes bases its process on Carbon; the key component to all life known on Earth, to propose a new musical instrument for sonic interactions. 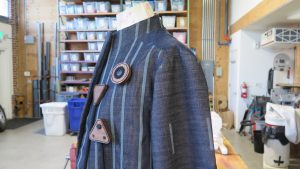 Based on last years research this work is an attempt to continue the research about Woolpunk. The map and timeline are defining a possible geo-temporal setting for early traces of Woolpunk societies in the Scottish Highlands.

I am feeling blue… and red 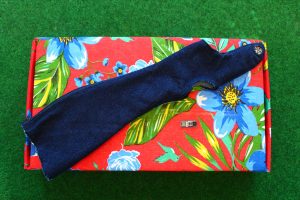 Ricardo O’Nascimento offers us a haptic experience focusing on the perception of color. “Color translation” made possible in the form of a glove withs sensors directly integrated into the fingers. Color pixels generate a patter of vibrations that can be felt up the arm. The result is an “intersemiotic” translation of color, going from sight and directly to the sense of touch. This project proposes a deconstruction int he way we use tactile functions. 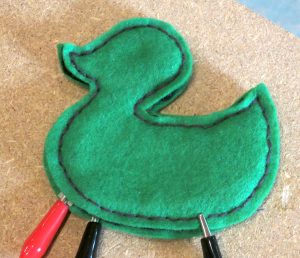 This simple, playful interface is an early exploration of how complex sounds can be synthesized by interacting with textiles. 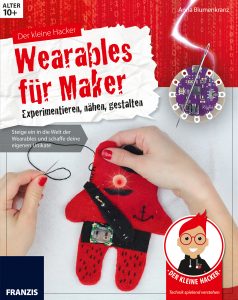 An educational book with detailed step-by-step instructions for beginners projects, insights into e-textile practice, and interviews with inspiring professional artists. 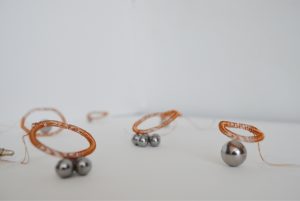 Chants Magnétiques seeks to highlight the electromagnetic characteristics created through the interaction of raw minerals such as copper and magnet. Their magnetic forces are amplified by the use of sound vibrating through their hand crafted textile structures.

Anatomy of a Pin 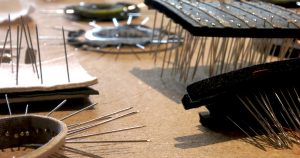 Their enticing sharpness allows pins to pierce through materials, including our skin. As straight lines they are capable of amplifying the movement of a surface they’re connected to, and collectively they accumulate into a soft manoeuvreable fur. With a hole on one end they can pull a soft line of thread through other materials, holding these together to construct three-dimensional forms. Being made of metal they are able to conduct electricity, and can be used to close a circuit to detect touch. As simple and commonly known tools they are transparent and familiar, and we use them to manipulate our world. 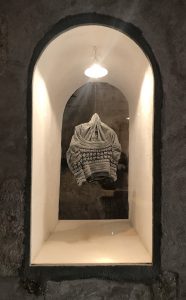 Garments for Uncomfortable Social Situations (GUSS) is a series of knitwear designed to be manipulated when the wearer is anxious. Knitwear allows for seamless integration of the sensor and seamless transition from conductive yarn to regular yarn. The way a knit is constructed- by building the shape of the garment while simultaneously constructing the textile- allows the conductive yarn to be kept as a continuous filament within each pattern piece. 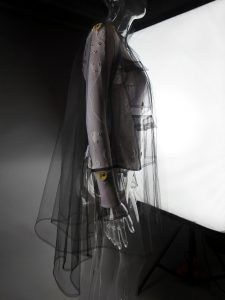 A collaboration between Rachel Freire and Sophia Brueckner, the Embodisuit allows its wearer to map signals onto different places on their body. It both critiques and offers an alternative to current trends in wearable technology. Most wearables harvest data from their users to be sent and processed elsewhere. 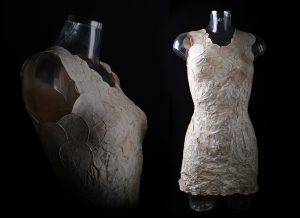 MycoTEX shows a new way of textile and clothing production. We start by growing the material and then placet his material onto a 3D mold to form a garment. On display are material samples. 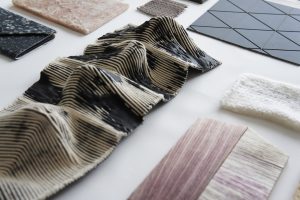 Ma-tt-er is a research studio, platform and consultancy that explores the past, present and future of materials.

Working across industry and education, we advise and support the implementation of responsible materials to shape the immediate, near and far future, examining their potential within the next one to five years, five to fifteen years and fifteen years plus.

By considering identity, lifecycles and systems thinking, we propose an alternative approach to applying materials, encouraging a positive economic, environmental and social change, revealing the truth of how we live today and might live tomorrow. 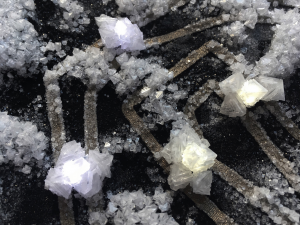 Electric Crystallography: samples of fabrics with LEDs and salt crystals. Displays a process where crystals can be grown on fabrics, dissolved and regrown again. 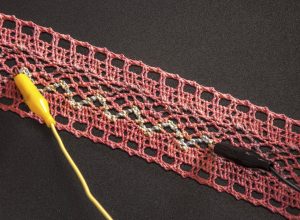 The lace senses how it has been touched, and outputs a programmed behaviour. After detecting the touch, it warms up to a certain degree and causes the thermo sensitive pigment to change the colour accordingly. 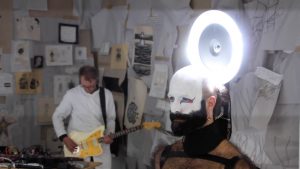 Ranbu is an improvisational performance created by a Japanese calligrapher, a musician, a body performer and an eTextile costume maker. The calligrapher and the body performer’s movements control the sound filter and the flash light. As the space fills up with the words and music, the Ranbu (Madness-Dance) starts to take place. 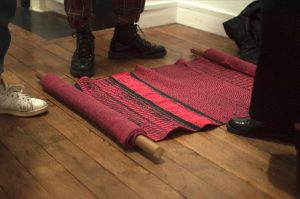 A textile memory composed by vocal messages and texts (online discussions, SMS). This piece take part of project CADDIE® AGAINST KHADI — individualize the textiles forms of the consumer society— . Generated with ASCIIMAGE and KnitHack; knitted with a double-bed Brother KH930/940 and Knittington.
– https://github.com/DataPaulette/asciimage
-https://github.com/stg/knittington 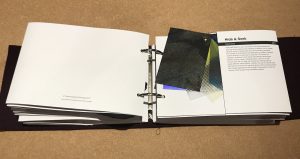 The E-Textile Summercamp‘s Swatchbook Exchange is a platform for sharing physical work samples in the field of electronic textiles. The exchange wishes to emphasize the importance of physicality and quality workmanship in an increasingly digital world. 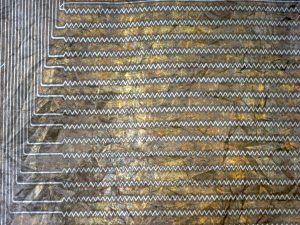 Transforming textiles into an intuitive way to interact with computers. This project is part of an electronic textiles research on HCI gesture interaction that was started in 2005. 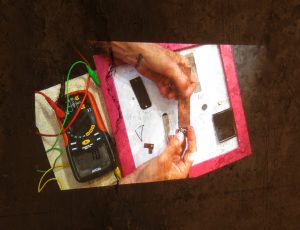 Experiments in capturing the process of designing and making e-textiles. Weexplored ways to be less-didactic, more conversational, the use of non-verbalcommunication for conveying relevant information. This installation features videos that came out of a 3-day session in May 2017, as well as the artefacts featured in the videos. 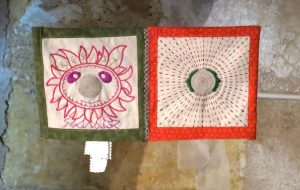 Combining DIY fabric speaker techniques with narrative quilting traditions, Sonic Quilt explores new ways of embedding personal stories into fabric. (dear lovely exhibition team, you can stop here, but if there is enough room for the next two sentences that would be lovely to have 🙂 Each square is a speaker activated by pulling the fringe attached to it. Take the fringe with you as a reminder, but be sure to leave another piece in its place.

Tactile Stories by Members of BucksVision 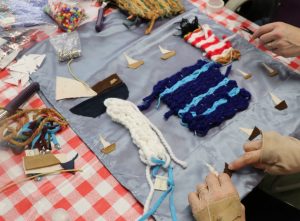 This work has been designed and created by members of BucksVision and was made during a series of hands-on participatory design workshops as part of Emilie Giles’s PhD research. Through these workshops we have been exploring the link between textures of materials and touch, with the participants creating interactive, textile art pieces which represent a personal story or association. All of the work is different being linked to family members, a journey or a memory of an activity done with a loved one. The work has a tactile quality to it as well as the visual, with sound recordings being triggered upon the buttons on the pieces being touched. 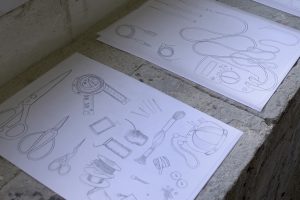 This is a very early version of tableaus showing tools, materials and routines of electronic textile making practices. They are inspired by Encyclopédie illustrations picturing a discipline.